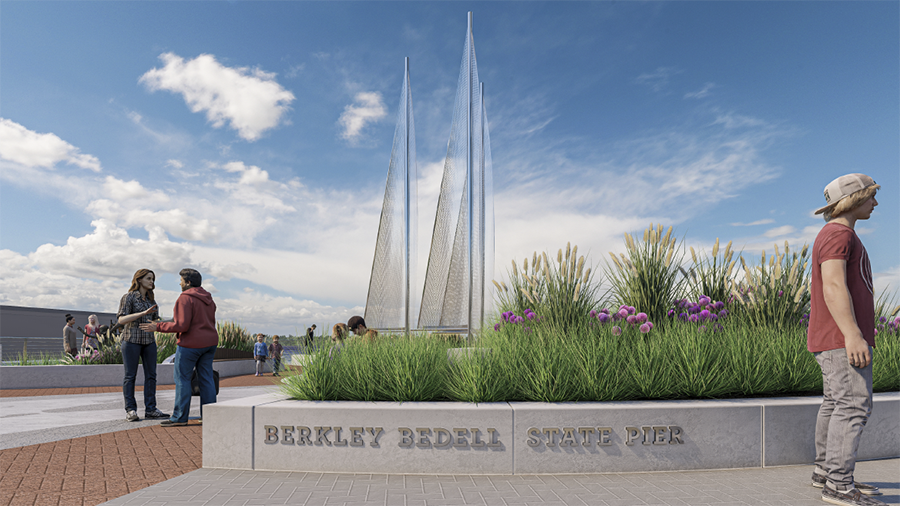 The State Pier sits on the south shore of West Lake Okoboji in Arnolds Park and is an iconic landmark. Throughout his lifetime, Berkley Bedell put forth efforts to ensure the public had access to the waters and shoreline surrounding the State Pier. Berkley was committed to conservation efforts including but not limited to the water quality of the Iowa Great Lakes.

Berkley passed away on December 7, 2019 at the age of 98. Berk was a hardworking, kind, and compassionate man and dedicated his life to actively make a difference. With the renovation of the State Pier nearing completion, there would be no better time than now to honor him in this way.

After attending Iowa State University, Berkley served in the Army Air Corps as a flight instructor. In 1945 Berk returned to Spirit Lake and founded Berkley and Company. He started this business at the age of 16 in his parents’ basement, tying lures and selling them to local tackle and bait shops. Berkley and Co. experienced tremendous growth over the next four decades and today, almost 80 years later, is a multi-million-dollar global fishing business that operates in every state in the U.S., and abroad in 19 countries, with 1,134 employees speaking 28 languages. Known as Pure Fishing today, the business continues working on conservation efforts through the Berkley Conservation Institute. Initiatives of the BCI include water quality, climate change, fisheries management, the future of fishing, recycling, and conservation implementation partnerships.

Wanting all voices to be heard, Berkley contributed on a state and national level serving five terms as a U.S. Representative for Iowa in Congress. During this time, he served on the Agricultural Committee, chaired the Small Business Committee and represented the United States on the UN Convention of Law of the Seas. During his political career Berkley worked on many issues related to waterway usage and farming.

In 1999 Arnolds Park Amusement Park, the area’s premier tourist attraction, was purchased by a real estate developer and was slated to be demolished and replaced with condominiums. Determined to preserve one of Iowa’s most treasured attractions and keep lakefront property accessible to the public, Berkley led a campaign to save the Park. Berk served as Co-Chair of the Save the Park Campaign and within six weeks the committee raised $7.25 Million, enough to buy the land back and keep it a public space.

In 1998 Berkley and his wife Elinor generously donated 80 acres of lakeshore property, one of the last
undeveloped parcels of land in the Iowa Great Lakes region, to the DNR. Knowing how little shoreline was available for public use, the Bedell’s had a dream that someday this property would be a state park. In 2001 their dream became reality when the land was dedicated as the Elinor Bedell State Park. Today the park serves as a recreational park and a powerful filtration system for waters as they flow into the lake.

With all that Berk had accomplished in life, he wasn’t done yet! Berkley had a dream to create something that would outlive him and benefit future generations in the Iowa Great Lakes. Garnering pledges from about 20 families Berkley was a founding member of the Okoboji Foundation, a community foundation that supports nonprofits in the region. Today, the Okoboji Foundation is stronger than ever and has granted $4.1 Million to projects that focus on lake quality, environment, outdoor experiences, recreation, and arts and culture. 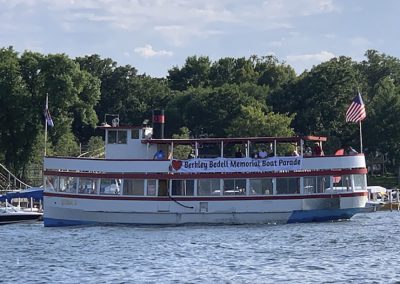 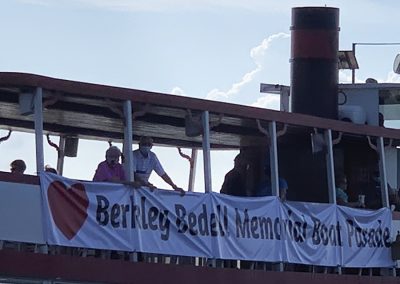 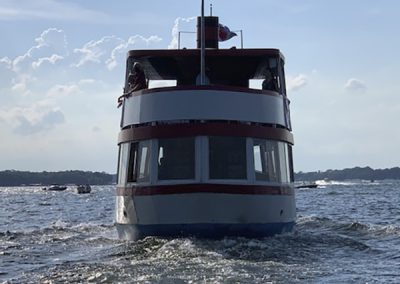 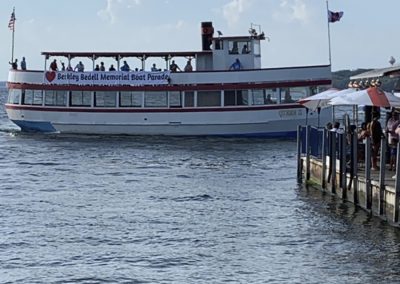 Boats will gather in front of Arnolds Park Amusement Park at 6:00 pm on Saturday, July 25th. Leading the parade will be the Queen II, carrying Berks’ close and longtime friends that he regularly gathered with upon his return to the lakes area. Following the Queen II will be Berkley’s family in boats. All others are asked to follow in line behind the family and the last family boat which will be carrying an American flag. The Queen II will depart at 6:00 pm and round Pillsbury Point traveling toward Terrace Park. It will then circle Emerson Bay, crossing from Gull Point to Manhattan Beach and follow the west shoreline to the north end of the lake. Returning along the east shoreline, the Parade will complete its journey back at Arnolds Park Amusement Park. The community is invited to participate. During the boat parade, a short memorial service will be broadcast on KUOO 103.9, thanks to the partnership of KUOO and Explore Okoboji. The memorial service will include messages from many of Berkley’s close friends and senators.

If the weather makes it uncomfortable or unsafe the Parade will be postponed until Sunday night. KUOO and Explore Okoboji will make announcements accordingly.

Berkley spent his life making a difference in the Iowa Great Lakes. His legacy reaches from his success in the fishing tackle business to his service in the US Congress to his dedication to enhancing the quality of life here in Dickinson County. His leadership helped create the Okoboji Foundation, was critical in the Save the Park fund drive, and he and his wife, Elinor, donated the land to create the Elinor Bedell State Park. Berkley is mostly remembered for his humble lifestyle and caring character. He was generous and giving to everyone he encountered.

On behalf of the entire Bedell family, they would to thank everyone for their love and support of Berkley.